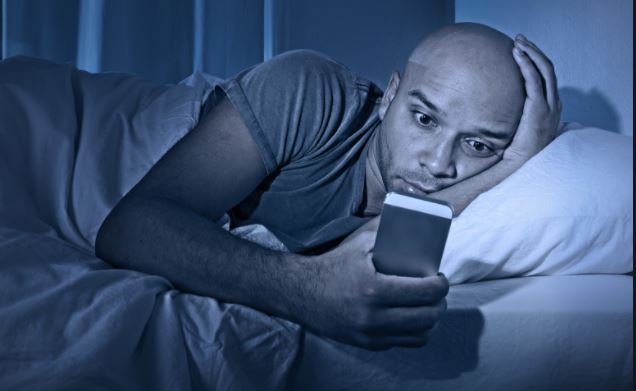 How blue light is affecting your health.

During the first lockdown, many people spent as much as 40 per cent of their day watching TV and online streaming services. And for many people, work and social lives also played out exclusively on devices, so that’s a lot of screen time. No wonder, then, that our interest in blue light – also known as high-energy visible or HEV light – has soared in the past year, with online searches up 58 per cent.  The data shows we’re unsure of the negative effects on our health and the steps we can take to protect ourselves.

What is blue light?

Most of us know sunlight contains visible light rays as well as invisible ultraviolet (UV) ones. But visible light comprises a range of different coloured rays, which each carry different amounts of energy.

“Blue light is one of the visible parts of the electromagnetic spectrum so it’s one of the colours we can see,” says Romesh Angunawela, consultant eye surgeon at Moorfields Eye Hospital. “It has shorter wavelengths than any other visible colour. It’s close to UV, which is even shorter, but not visible to us.”

As well as being present in daylight, blue light is emitted by fluorescent lamps and LED devices such as computers, smartphones, TVs and tablets.

“Electronic devices tend to emit more light in that spectrum than natural light does,” says Angunawela.

This, plus the time we spend on our devices and their proximity to our faces, has health professionals concerned about the potential consequences.

ALSO READ: Is it smart to put your phone on the bedside?

So what are the effects?

“Blue light adds haziness to things you’re seeing. So if you spend a lot of time on a screen, you tend to get ­something called screen fatigue,” says Angunawela. “Your eyes are struggling to focus, which can tire them out.”

Screen fatigue is also down to our reduced blink rate when using devices.

“When you’re looking at a screen, your eyes get dry because your blink rate drops down to half as much as when you’re talking face-to-face.”

As well as strained eyes, this can cause headaches and fatigue. While our eyes are effective when it comes to blocking out UV light – less than one per cent of UV radiation reaches the retina – they’re less adept when it comes to blue light.

Blue light can infiltrate all the way to the retina – the inner lining of the back of the eye – and studies have shown that too much exposure to blue light can damage light-sensitive cells in the retina.

“Because of this, there are theories that increased blue light exposure could increase the risk of developing cataracts or macular degeneration,” says Angunawela.

“Having said that, nature didn’t build your eye without a blue light filter. Your cornea and lens do filter out most blue light wavelengths.” The problem, he explains, is the relatively modern condition of having so much blue light close to our eyes for such prolonged periods. The concern is that we’re exposing ourselves to too much. It’s due to this that many of the lens implants we now use contain blue light filters.”

ALSO READ: Sleep expert shares 10 rules – including ‘simple trick’ to get an extra hour of sleep every night

Just as UV light can affect our skin, so too can blue light. One 2010 study compared the effects of both types of light on skin, and while skin exposed to blue light showed no signs of cancer growth, it did show more dark patches, called hyperpigmentation. Another lab-based study found that just one hour of screen exposure was enough to increase free radical production, which can contribute to hyperpigmentation and skin ageing. As with eye health, more research is required to ascertain the extent of the effects.

You probably feel a twinge of guilt when checking your smartphone in bed – we all know devices should be kept out of the bedroom.

While blue light in the day helps regulate our sleep/wake cycle, studies show that exposure at night suppresses the secretion of ­melatonin – the hormone we need for sleep – more than any other kind of light. Lack of sleep has been linked to increased risk of depression, as well as cardiovascular problems and Type-2 diabetes.

When it comes to us fully ­understanding the lasting effects of blue light, it is a waiting game.

“These issues are theoretical because we think long-term exposure will be ­problematic, but at the moment we don’t have enough long-term data,” says Angunawela.

“But the day-to-day eye fatigue and headaches – that’s already ­happening. It doesn’t do any harm to protect yourself, so it’s worth taking measures to do so.”